If you're happy to travel

You can catch Here Come The Mummies at Musikfest Cafe in Bethlehem, showing Oct 4, 2020

Here Come The Mummies is also touring to:

You are viewing a past performance of Here Come The Mummies

You can catch Here Come The Mummies at the The Castle Theatre, showing December 3, 2020 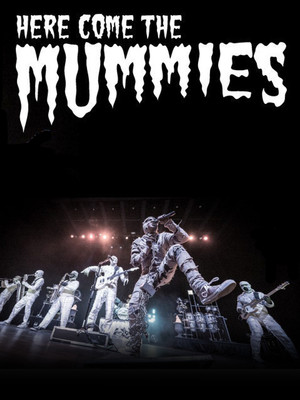 Why See Here Come The Mummies?

The Mummies Are Coming!

A 5,000-year-old foul-smelling, well-endowed, and manly tribe, capable of infinite funkiness are coming to town! The funk band kicked things off in 2000, and are best known for their unrelenting live performances which melt your face and keep the mayhem going from beginning to end. Here Come The Mummies... literally!

Rumour has it that the band has several Grammy awards among the members, though these members remain anonymous which only adds to the excitement of seeing them live. According to the band, they were cursed for deflowering a Pharaoh's daughter! Others claim they are reincarnated Grammy Award-winning members. Well, there's only one way to find out - make sure you don't miss them when they come town.

Sound good to you? Share this page on social media and let your friends know about Here Come The Mummies at Monarch Music Hall.